surrounding communities. To be a light that will help the broken hearted, outcast, poor, addicted

and all who have lost hope. To empower people to live through the preaching and studying of the

Holy Word of God and be an example of the love of Jesus Christ. 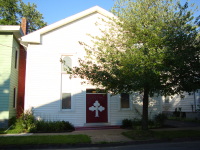 In 1970, the Lord gave Bishop Leroy Anderson (Jurisdiction #1, Western New York and General Board Member of the Church of God In Christ Worldwide) a vision for a church to be established in Ithaca, NY.

Many ministers attempted to start a ministry in Ithaca but didn't survive. Being led of God, Bishop Anderson sent word to Rome, NY to ask a minister known throughout the state as a worker in the Sunday School department, Elder Clarence Christian. Elder Christian, an associate minister at the First Tabernacle Church of God In Christ of Rome, NY never dreamed that it would be him that was given this great task. Bishop Anderson felt that Elder Christian was a man of good report. He had confidence that Elder Christian would uplift God and the Church of God in Christ.

Elder Christian wasn't sure the task was a job for him; he knew this would be a big move for him and his family. Instead of giving the Bishop an answer right away, he fast and prayed for a direction from God. God dispatched an angel to his home singing with a small voice, "I'll be with you." Elder Christian then had no doubt about the direction he must take. By faith he called and gave Bishop Anderson an affirmative answer about Ithaca. When Elder Christian accepted the challenge of a city he had never seen, God opened the doors for him to move. He sold his home in Rome and purchased a duplex home in Ithaca. The Bishop was led to sow a seed for establishing the new Church of God In Christ. This allowed Elder Christian to purchase the Masonic Lodge at 521 1/2 S. Meadow St. next to the Meadow Court Motel. Elder Christian had to go before the Lord in prayer once again; he needed to know what the name of the church should be. God revealed that the church should be named Our Lord's Temple. The first dedication service was held May 14,1971.

After nearly three years the owners of the motel next door to the church, felt that the praise service was disturbing to their patrons. They also did not like church members and visitors utilizing their parking lot. The motel owners decided they needed to purchase the building from Our Lord's Temple. Bishop Anderson sent the late Supt. Nelson to negotiate the purchase price for the building. Supt. Nelson amazed the owners with his negotiating skills, but they knew that they had to purchase the building.

Without a building to hold services, Elder Christian had no choice but to move the church to his home. At his home, they held all Sunday and weekly services. The pews were stacked in the car port while he looked for a building that woud be proper for his people. For two months Elder Christian and his family were sharing their home with God's people. He found a building at 443 N. Tioga St. owned by the Seventh Day Adventist Church, and made a purchase offer to buy the building. They applied for loans at three different banks, and were all declined. Knowing how prayer changes things, Elder Christian led the members in fasting and praying for three days every week for one month. God led Elder Christian to return to a bank that was known to be the toughest to borrow from. He obeyed God, and the Lord touched the bank officers heart and they approved the financing for the building. One year after purchasing the building, the jurisdiction came for the dedicatory service.

Having a desire to be near their older son , Pastor and Sister Christian resigned from pastorship in December 1974 and relocated to Houston, Texas.

Bishop Anderson appointed the late Elder J.T. Roberts and Sister Roberts to continue the ministry. Pastor and Sister Roberts were spiritually and financially faithful in the renovation of the church. God added to the church and continued to give the Church of God In Christ a place of strong influence in Ithaca. Elder J. T. Roberts was pastor from 1974-1984.

Elder Walter Roberts, son of Elder J. T. Roberts, led God's people at Our Lord's Temple from 1984-1985. He was a great influence for the youth and he helped bring them together in unity.

Elder Calvin F. Christian, our current pastor, was appointed by Bishop Leroy Anderson in May 1985 to keep the fire burning that these great men of God had started before him. His focus is the Holy Word of God and that we are to be the Lamplight for the city. He wants everyone to know that God cares about them; and to be encouraged, knowing that God is able to work it out.

Many renovations on the exterior and interior of the church have taken place under his leadership. The Holy Ghost has His way in our services. Many people travel through this area, their lives are touched and God makes a different to all those who yield their souls. Our pastor always says " This is not my church, it's not a black church or white church, it's God's church." "Upon this rock I will build my church, and the gates of hell shall not prevail against it. "

Pastor Christian was appointed District Superintendent of District #6 in the Holy Convocation, August 1998 by Bishop Anderson.